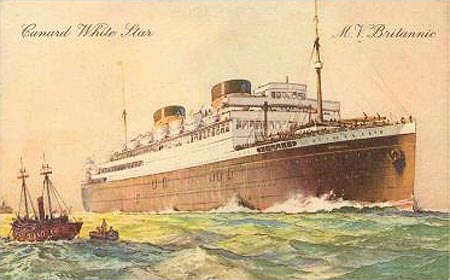 Founded by Thomas Henry Ismay in the 1860s as a main competitor to Cunard Line, the famed White Star Line (trading name of the Oceanic Steam Navigation Company) built up a fleet of modern, comfortable ocean liners.

Purchased by the American J.P. Morgan’s IMM Co. in the early 20th Century, it was amalgamated with a number of smaller lines and managed under the leadership of Thomas Ismay’s son, J. Bruce Ismay.

During the decade starting in 1910 they completed their three most iconic liners, Olympic, Titanic and Gigantic (launched as Britannic). However disaster followed White Star Line and by the end of the decade only Olympic remained.

Sold again in the 1920s and back in British control, the company was impacted heavily by the Great Depression. In 1934 White Star merged with Cunard to form the Cunard-White Star Line, allowing for the newly amalgamated company to complete the RMS. Queen Mary.

Several White Star ships were operated under the Cunard-White Star banner. They retained their original funnel colours and names. White Star Line was bought out by Cunard in 1947, and following retirements of White Star’s remaining fleet, only Britannic and Georgic remained.