The Concept of QM2

The decision to build Queen Mary 2 was announced  on 8 June 1999 as “Project Queen Mary”. This announcement was for the design and development of what would become the largest Ocean Liner ever built, in what Cunard described at the time as the ‘next evolution of ocean liner design.’

Cunard’s (then) Norwegian shareholders were informed by Larry Pimentel (then) President & COO of Cunard who said:

“The project will lead to development of the heaviest liner ever built – the epitome of elegance, style and grace…It is our objective to build a new generation of ocean liner that will be the very pinnacle of the shipbuilder’s art; the realisation of a dream of another time… Our goal is nothing less than to create a new Golden Age of sea travel for those who missed the first.”

Pimentel’s announcement was followed by the first meeting of a new “Project Queen Mary” planning team. Under the direction of Stephen Payne, the team met regularly during the design phase to develop plans for the new ship. This was no small task, as the team were effectively picking up where the designers of QE2 had left off over 30 years prior.

The speed at which the new ship was constructed was aided by the use of prefabrication, with QM2 built using a series of blocks that were assembled in advance and later attached to the ship.

Queen Mary 2 sailed to Southampton in late 2003 under the command of Commodore R. W. Warwick, who had previously commanded QE2. Interestingly, his father Commodore Bil Warwick was the first master of QE2! While alongside in Southampton the ship was christened by HM. Queen Elizabeth II on 8 January 2004, before entering service a few days later.

12 January 2004 was a historic day for Cunard Line as thousands descended on Southampton to witness QM2 depart from Cunard’s home port on her Maiden Voyage.

During the 2004 Athens Olympics, QM2 played a central role providing accommodation for athletes families. She was also host to (then) UK Prime Minister Tony Blair, (then) French President Jacques Chirac and (then) American President Bush. QM2 was also home to the US men’s basketball team. Due to the QM2’s presence, security in Piraeus (Athens’ primary sea port) was extremely stringent, with constant guards and scuba divers on call incase of mishap.

In 2005 QM2 was selected to carry the first US signed copy of JK Rowling’s book Harry Potter and the Half Blood Prince, which was transported aboard the Cunard Liner under guard in a vintage steamer trunk!

During 2006 QM2 completed numerous transatlantic crossings as well as long duration cruises. Throughout her second year in service, QM2 began to become an icon in the countries where she visited. Due to her immense size, the ship is unable to transit the Panama Canal. As a result, during her 2006 circumnavigation of South America she rounded Cape Horn – and successfully repeated this voyage for her 2007 Maiden World Cruise, visiting the East Coast of the United States. 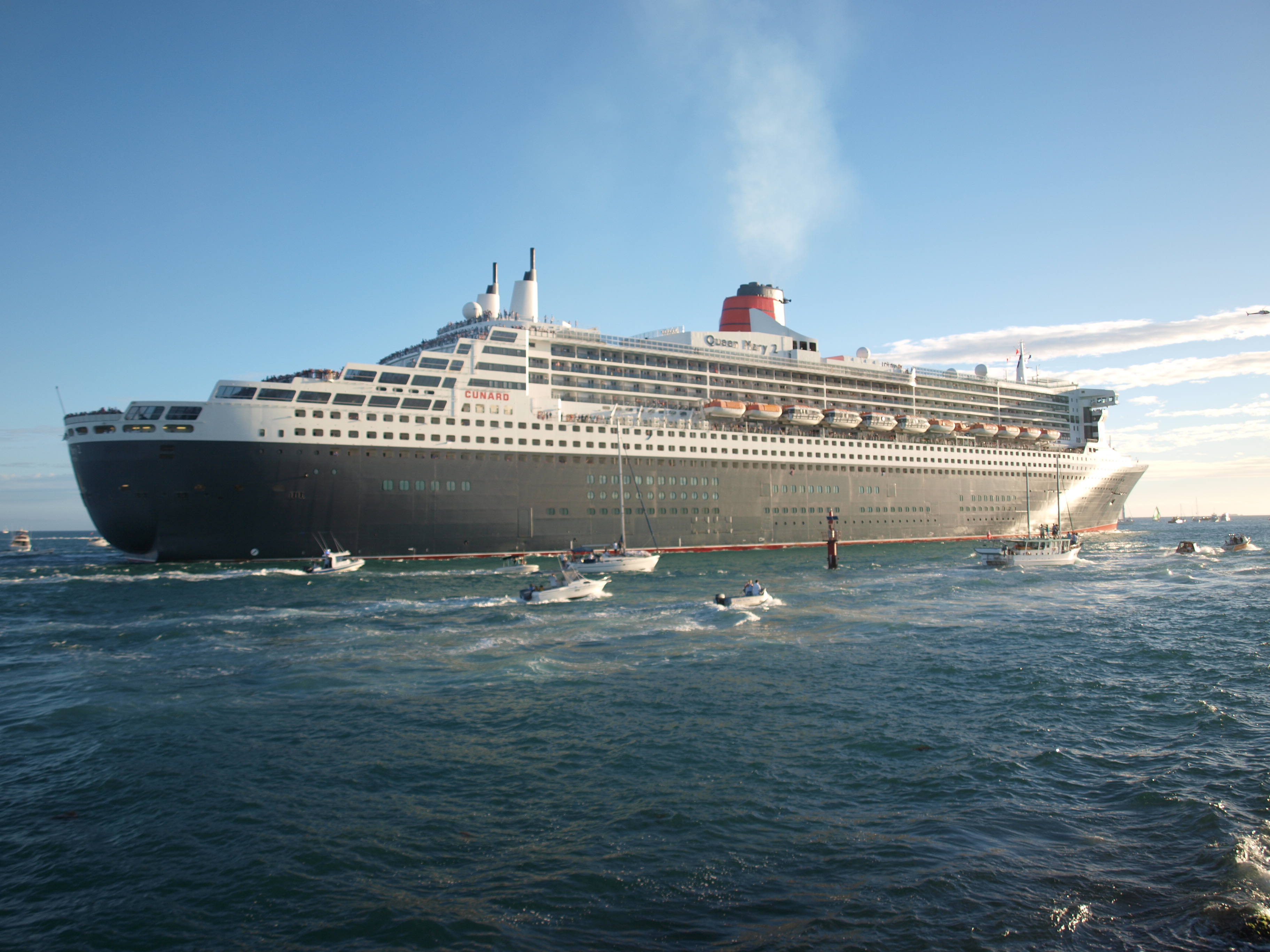 A significant moment in QM2’s life occurred in February 2007 when, during her Maiden World Cruise, she met QE2 in Sydney Harbour. It was the first time since World War II that two Cunard Queen’s had visited the Australian city at the same time.

An estimated 1-million people visited the harbour to see the two ships, with hundreds of thousands gathering to watch the two ships pass each-other in the late afternoon. A spectacular fireworks display was put on in honour of the occasion. QM2 continued her 2007 season exploring new destinations and maintaining the Cunard tradition of the transatlantic service.

10 October 2008 was a historic day for those aboard QM2 as she sailed out of New York harbour behind the retiring QE2. Many of the QM2’s crew had served aboard QE2 in years past, and thus the final tandem transatlantic crossing was particularly emotional occasion for many serving aboard QM2.

QM2 undertook her second circumnavigation of the globe in 2009. This world cruise was made in conjunction with Queen Victoria. During this voyage, QM2 briefly shared a berth with her former sister QE2 which was laid up at Dubai’s Port Rashid at the time. Throughout the remainder of 2009 the ship enjoyed a busy transatlantic season while undertaking a number of cruises. In October 2009, Queen Mary 2 celebrated her 5th year in service with an 8-night voyage around the British Isles. The voyage included maiden visits to Greenock (Scotland) and Liverpool (England).

In early 2010 QM2 set out on her third World Cruise once again calling at Dubai and spending the day at close quarters with QE2. This voyage was a partial circumnavigation of the globe, heading Eastbound to Australia and then back to the United Kingdom Westbound via South Africa.

In September 2010, QM2 was left adrift for several hours after a failure of a capacitor in the aft harmonic filter room while the ship was en-route to Barcelona. The situation was rectified by the onboard crew and the ship arrived safely, albeit several hours late.

During 2010 QM2 operated a number of seven-night transatlantic crossings. The extra night was both a response to increasing fuel costs, but also due to passenger feedback suggesting that a longer voyage was preferred.

The need for QM2’s unique transatlantic capability was highlighted when the Icelandic Volcano, Eyjafjallajokull erupted during 2010. With aircraft grounded across Europe, a significant waiting list developed for QM2’s voyages to America.

In 2011 QM2 set sail on her fourth World Cruise. During this voyage the ship’s schedule was interrupted due to the Christchurch Earthquakes, and the Japanese Tsunami. In New Zealand the ship diverted to the unaffected Wellington, while in Japan, QM2 shortened her stay in order to avoid any danger from the damaged Fukushima Nuclear Powerplant.

During November 2011 the ship underwent a refurbishment at the Blohm & Voss shipyard in Hamburg. Here, the vessels port of registration was changed from Southampton (UK) to Hamilton (Bermuda) marking the end of 170 years of Cunard’s flagship being registered in the United Kingdom. Other work undertaken during the refit included a partial redesign of the Golden Lion Pub, as well as the installation of flat screen televisions in all cabins, and kilometres of new carpeting installed throughout the ship.

In 2012, QM2 completed her first circumnavigation of Australia. Commencing in Sydney, the ship sailed to Brisbane, Cairns, Darwin, Bali, Fremantle, Adelaide and Melbourne, before returning to Sydney. The voyage sold out within hours of going on sale. The success of the ship’s Australian voyage prompted a similar circumnavigation of New Zealand in 2013, and a further extended Australian voyage in 2014.

In 2013, QM2 completed her 200th transatlantic crossing. She later made headlines in September when she was called to the aid of Mylene Paquette, who was attempting to become the first North American to row the Atlantic solo. Ms Paquette had been hit by the remnants of Atlantic Storm Humberto, and required assistance.

“We are happy to have given assistance to Mylene and help her recover from the damage inflicted by the storm. We wish her the very best of luck with her solo Atlantic rowing adventure.”

QM2’s chef also supplied her with various provisions including English tea and pastries.

2014 marked the tenth anniversary of QM2 and to celebrate a series of special events were arranged. This culminated with the meeting of the three Cunard Queens in May. All three liners met both in Lisbon as well as Southampton for an impressive series of rendezvous; while in 2015 QM2 met Queen Victoria in Sydney, Australia at the start of Cunard’s 175th Anniversary celebrations.

Cunard’s 175th year saw a series of spectacular events which included a magnificent ‘Three Queens’ rendezvous in Liverpool as well as a special transatlantic crossing aboard QM2 from Liverpool to Boston – retracing the first voyage of Britannia.

In 2016, the Queen Mary 2 completed the most extensive and significant refit in her career thus far. Dubbed QM2 Remastered, the work was undertaken at the Blohm + Voss shipyard in Hamburg, Germany.

It involved re-creating many of QM2’s public areas. Changes included rebuilding the Kings Court into a more usable space; re-designing the Winter Garden and re-naming it Carinthia Lounge; replacing Todd English with the popular Cunard Verandah Restaurant; the installation of a Godiva Chocolate Cafe in Sir Samuels; re-designing every cabin aboard as well as the installation of new single-cabins.

Internally QM2’s corridors and communal meeting areas were enhanced with the addition of new carpeting sporting a dramatic ‘starburst’ effect – reminiscent of the art-deco designs used aboard the RMs. Queen Mary. When the ship returned to service in mid-2016 the refit was heralded as a huge success by passengers and critics alike.

Queen Mary 2 completed a special transatlantic crossing in November 2019 in honour of the 100th anniversary of Cunard’s Southampton sailings. It was November 1919 that the first express service departed Southampton aboard Mauretania. The anniversary voyage included a shipboard travelling museum from Sea City and maritime lectures from Chris Frame and Penny Legg. During the voyage the ship encountered severe weather, with several hours categorised as Force 12.

2020 commenced with QM2 undertaking an extended voyage that will see the ship visit the Mediterranean, UAE, Asia, Australia and South Africa.

The Coronavirus outbreak in China led to Cunard cancelling QM2’s calls to Hong Kong, originally replacing it with Singapore. On 9 February 2020, Queen Mary 2 was diverted from all planned calls in Asia to Fremantle, Australia, due to the ongoing Coronavirus outbreak. With the ship arriving into Fremantle on 18 February, Cunard worked to establish a series of new cruises to extend the ship’s Australian season.

Queen Mary 2 continues to delight new guests and repeat travellers alike. She is under the command of Captain Chris Wells and Captain Aseem Hashmi, both of whom have enjoyed long Cunard careers.