The need for Queen Mary

In the 1920s, Cunard identified the need to replace the ageing Mauretania on the transatlantic run. Initially they line wanted a ship of similar scale to Aquitania, although mechanically modernised.

As the design for the new ship evolved, the dimensions grew into a liner of over 310m (1,019 ft) long and 81,000 tons, making it a contender for the world’s largest passenger ship. It was at this point that Cunard committed to the idea of building not one but two giant ocean liners, with the goal of commencing the first ever two ship weekly transatlantic service.

On 31 January 1931 the keel was laid at the John Brown Shipyard in Clydebank, Scotland on Hull 534. Construction of the ship progressed fast, with launch originally scheduled for May 1932.

However, on 11 December 1931 Cunard announced that work on the ship was to be suspended, due to the crippling effect of the Great Depression. Cunard and the British shipping industry had been hit hard by the lack of international travellers, as well as a reduction in cargo revenue.

Cunard, desperate to complete Hull 534, also approached the government for assistance. The British Government were particularly concerned about the state of the British shipping industry. Germany, Italy and France had all eclipsed Cunard and White Star Line with new ships that included the legendary Bremen, Europa (Germany), Rex (Italy) and Normandie (France).

In December 1933 a British Government deal was reached, whereby the two companies were required to merge to form Cunard-White Star Line. In return, the government provided the new company – Cunard-White Star, with a £9.5 million loan.

This allowed Cunard-White Star to recommence construction on Hull 534 and also commence planning works for a running mate. In April 1934 work began again on Hull 534. This was a welcome relief to the local area and thousands of people flocked to Clydebank in search of work at the shipyard.

With the workforce back aboard the ship, work progressed quickly. The ship was ready for launch by August 1934 and the ship was launched as R.M.S. Queen Mary on 26 September by HM. Queen Mary, with HM. King George V by her side.

The ship was then moved to the fitting out basin, allowing her interiors to be completed. This saw a magnificent art-deco interior installed aboard the liner, breaking the long tradition of Edwardian interiors on the Cunard express service and taking the travelling public by storm.

In March 1936 Queen Mary set sail for her sea trials, which she completed by May of that year. Queen Mary’s maiden voyage departed on 27 May 1936; sailing on the Southampton to New York (via Cherbourg) service. At this stage, France held the speed record for the Transatlantic crossing, thanks to the French Ocean Liner SS. Normandie.

Despite Cunard declaring that the Queen Mary was not designed to race against Normandie, expectations were high that the Cunard ship would try to break speed records on its maiden voyage!

During the final days of what would have been a record breaking maiden crossing, a thick fog descended upon the ship and Queen Mary was slowed, making a successful record attempt impossible.

Queen Mary made her last peacetime voyage from Southampton on 30 August 1939. Upon arrival in New York, the ship was berthed in the relative safety of the US port while World War II commenced in Europe.

She remained here until the end of the year as the war escalated, and the British Admiralty decided what role the ship would play in the coming months and years.

Having been joined in New York by Normandie and the newly launched Queen Elizabeth, for a brief period three of the world’s largest transatlantic liners sat idle together in the harbour. The trio were also joined by the second Mauretania.

In March 1940 Queen Mary was called into military service. She sailed from New York bound for Sydney, Australia to prepare her for her wartime duties.

Upon her arrival in Australia, she was sent to the Cockatoo Drydock on Cockatoo Island, and work commenced to convert the ship into a troop carrier. Queen Mary’s luxury fittings and interior were removed and safely stored. In their place, thousands of bunks and hammocks were installed; while the ship’s large public areas were rearranged into mess halls and offices for military purposes.

To protect the ship, small caliber guns were fitted on the Queen Mary, including anti aircraft guns on her open decks. But it was the Queen Mary’s speed that would be her main protection against possible attack.

To that end, the liner was ordered to sail at high speed when carrying troops, to avoid danger from enemy shipping.

On 4 May 1940, Queen Mary departed Sydney with troops of the Australian Imperial Force on board, bound for the River Clyde, Scotland. After operating on this route, and various others, Queen Mary concentrated on voyages between Australian ports and Singapore to the Gulf of Suez.

When the United States of America entered the war on the side of the allies in 1941, Queen Mary’s trooping capacity was increased to over 15,000 people.

Following further refurbishment, she entered service in her new role as a mass transport of troops on the North Atlantic. It was on this service that Queen Mary carried the most people ever transported by a ship – 16,683 people in one voyage – a record she still hold to this day

On 2 October 1942, while Queen Mary was steaming at 28-knots in a zigzag pattern the ship collided with her escort the HMS Curacao. The accident tragically resulted in the smaller escort being cut in two, and sinking. Queen Mary’s bow was badly damaged, and between October and December 1942 she was repaired at Boston.

At the end of the War, Queen Mary was used in the urgent and time consuming task of repatriating thousands of servicemen. Following this duty, the ship was utilised on the war bride service, being employed in this capacity from January to September 1946.

Queen Mary and her sister Queen Elizabeth were the largest troop ships in history. Their ability to transport upwards of 16,000 people per crossing made a significant impact to the allies war effort.

In fact, Winston Churchill himself acknowledged the Cunard Queens, crediting them for helping reduce the war, saying in a letter to Cunard Chairman Sir Percy Bates:

Without their aid, the day of final victory must unquestionably have been postponed. 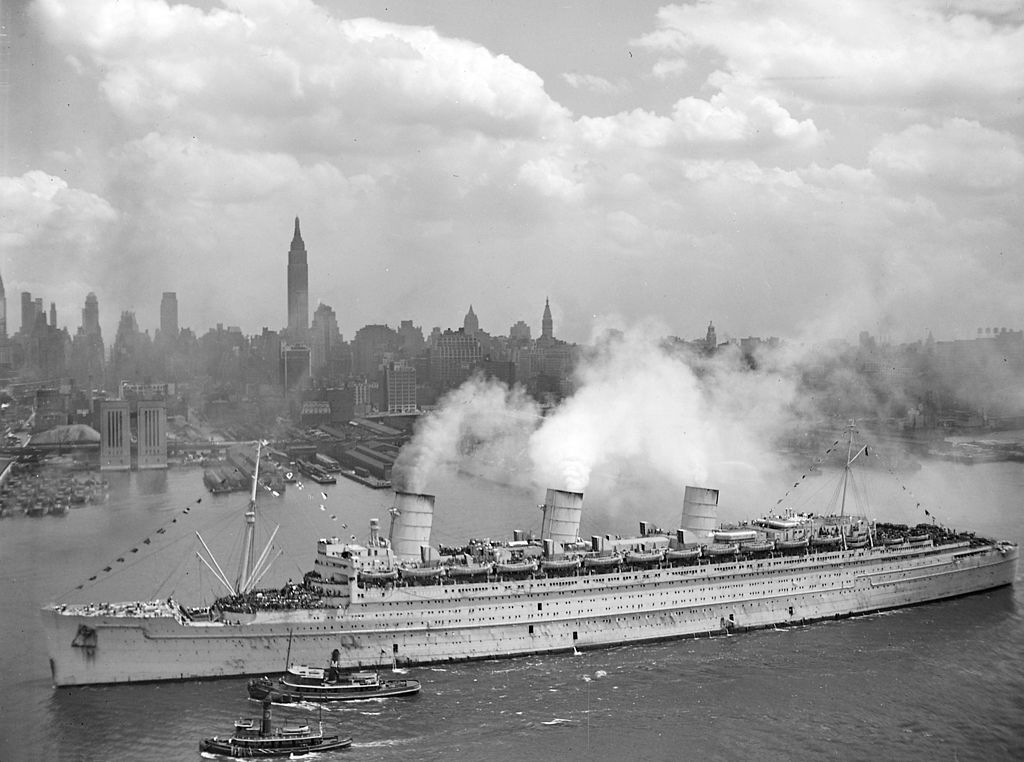 Queen Mary was returned to Cunard on 27 September 1946, having sailed over 900,000km (600,000 miles) and carrying 800,000 people. Following an extensive refurbishment, the ship was returned to passenger service. In this role, she carried 776 first class, 774 cabin class and 579 tourist class passengers.

In 1952, Queen Mary lost her speed record to the SS United States. The American’s had witnessed the success of the large Cunard liners as troop ships during World War II. Furthermore the US Government had needed to charter the Queens during that conflict. With the Cold War in full swing, they supported the United States Lines in building SS. United States, a ship that remains to this day as the fastest ocean liner ever constructed.

Despite this new competitor, Queen Mary remained popular. Business was good for most of the 1950s, however air travel was becoming increasingly dominant with fast piston airliners such as the Lockheed Constellation and Douglas DC6 attracting larger numbers of travellers.

In March 1958 Queen Mary was fitted with Denny-Brown stabilisers. Originally trailed aboard the smaller Cunard liner Media, these stabilisers greatly helped Queen Mary’s stability and addressed a ‘rolling problem’ the ship had endured for much of her career.

In 1958, Boeing’s 707 jet made its first commercial service across the Atlantic for Pan Am Airways. The introduction of fast commercial jets signalled the beginning of the end of the transatlantic liner.

By the early 1960s, there was increasing speculation that Queen Mary would retire from Cunard service. Commencing in December 1963 Queen Mary increasingly undertook pleasure cruises. However the ageing Queen Mary was not designed for cruising. Her art-deco interiors were from a bygone era; while her deep draft and lack of air conditioning made her unsuitable for this role.

The ship, along with much of the British Merchant Marine, suffered further during the Seaman’s Strike of 1966. The strike cost Cunard millions of pounds and ultimately meant retaining the loss making Queen Mary was impossible.

Queen Mary was eventually sold to Long Beach California to become a floating hotel. She sailed on her last direct transatlantic crossing on 16 September 1967, from New York to Southampton. The ship then undertook her longest ever peacetime voyage; sailing around Cape Horn before docking in Long Beach.

She was extensively refurbished – work that included replacing the original funnels and decommissioning her steam turbine propulsion system, and opened in the early 1970s.