I joined the ship for its first voyage following the 2017 refit. I was aboard as a guest speaker.

Queen Victoria docked at the Ocean Terminal in Southampton, which made boarding a breeze. The terminal is set up to accommodate a high volume of passengers, who are sorted into groups including Diamond and Platinum Cunard World Club Members, those requiring mobility assistance and general embarkation.

As a time saving method, all key cards (which are used to open cabin doors as well as purchase drinks onboard) are pre-printed, meaning that passengers need only register a credit card and pose for an ID photo before being directed to the waiting shipboard photographers, ready to snap the first of many holiday photos.

Bellboys, dressed in traditional Cunard attire greet you as you enter the Grand Lobby. This stunning room, comprising of multiple levels and a Grand Staircase; somewhat resemblant of that aboard RMS Olympic. It makes for a gracious and stylish first impression of this very regal vessel. 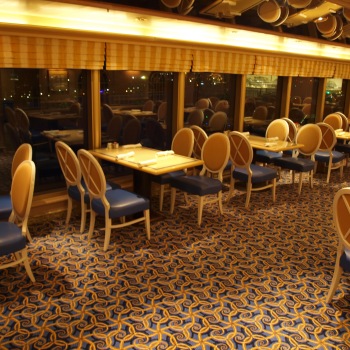 There are a large range of cabins aboard Queen Victoria, which range from the ultra deluxe Grand Suites (named after Cunard liners of a bygone era), to more cosy inside rooms. All rooms were refurbished during the 2017 refit with new TVs, carpeting, upholstery and improved lighting.

As with all Cunard ships, Queen Victoria’s cabin grades are connected to the restaurant that one has access to. There are four grades to choose from, with each grade having a number of categories to suit a range of budgets.

Queens Grill is the pinnacle of onboard cuisine. The single seating restaurant is situated high atop the ship and includes access to the private and sophisticated Grills Lounge. Cabins (actually, these rooms really are staterooms) in this grade are large, spacious and some come complete with a butler. The four largest suits boast a large balcony that overlooks the stern of the ship; complete with an outdoor lounge and daybed!

Princess Grill passengers enjoy spacious cabins, all of which have balconies and large closets as well as ample space within the ensuite bathroom.  Passengers often select Princess Grill for the privileges it offers (including a personal concierge service) as well as the slightly lower price tag when compared with the Queens Grill experience.

Added in the 2017 refit, the Britannia Club restaurant occupies a space that once housed the original Chart Room bar. It’s decorated in dark wooden tones, while it sports modern carpets and lots of natural light thanks to the large windows. This restaurant offers single seating dining and a varied menu.

The majority of travellers who sail aboard Queen Victoria will do so in Britannia Cabins and as such dine in the Britannia Restaurant. Set at the aft end of the ship on Deck 2 and Deck 3, the Britannia Restaurant is modelled after the Orient Express railway carriages. As such, it sports dark wood finishes though is an overall lighter colour palate than the Britannia Club. The focal point of this space is a large globe set amid a stylised mural depicting the Atlantic Ocean. Service here is attentive and is arranged over two seatings – early at 6pm and late at 8:30pm.

Other dining options are available across the ship. There is the popular Lido Restaurant, with fantastic ocean views and a large selection of food. We particularly liked the Pizzeria which cooked pizzas fresh to order in just 7-minutes! Fantastic! Some other favourites included Fish & Chips (and a Guinness) in the Golden Lion, or a cheeseburger at the Lido Grill out on the open deck. Perhaps not the healthiest choice, but you are on holiday after all! Queen Victoria is a very happy ship. Many of her crew are well established Cunarders who undertake their job with the utmost professionalism, while also being personable, approachable and friendly.

This is experienced first hand when meeting your Cabin Steward. We were welcomed by the smiling face of Rowena, who had looked after us aboard QE2 years before, and remembered us – a very nice touch!

The Royal Court Theatre is situated at the forward end of the ship, across three levels (Deck 1, 2 and 3). It is designed to resemble a Victorian theatre, complete with box-seats. It also includes fantastic little corridors that connect all the boxes; a very authentic touch!

Here is where you go to watch the guest speakers, who cover a range of topics including destinations, local history and the history of Ocean Liners (this is what I spoke aboard while aboard). Our Entertainment Director was Sally Sagoe who has been aboard Queen Victoria since 2013.  Sally personifies all that is Cunard and ensured that each and every lecturer was introduced in a warm and welcoming manner, which was much appreciated.

Aft of the Royal Court and you’ll find yourself in the Royal Arcade. The Deck 3 level acts as  Queen Victoria’s shopping promenade. The boutique shops were remastered during the 2017 refit. It is here that you’ll find everything from designer handbags and watches to QV branded bears, pens and keyrings. The Deck 2 level provides access to the Casino and the Golden Lion – Cunard’s take on a traditional English pub – and all are accessible via twin staircases that surround a large authentic Dent Victorian Clock.

Queen Victoria’s Queens Room is a very impressive space. Far easier for new passengers to find than the Queens Room aboard QM2, it took some inspiration from QE2 in that it is designed with the access corridor in mind. As such the Queens Room on Queen Victoria is highly visible and easy to find! The space is actually split into two areas, the Queens Room (which includes the dance floor and stage) and the Queens Arcade, which is an extra seating area, used to great effect during the traditional Afternoon Tea service.

Fencing lessons are held here, early in the morning, and are in high demand! The room, while very spacious, does tend to struggle with the high demand at Afternoon Tea time, where you’ll often find a queue of people waiting for a seat. However Cunard staff manage the queues well and the Afternoon Tea experience is worth the wait; with cakes, sandwiches and scones with jam and cream!

There are a number of bars aboard Queen Victoria including the newly established Chart Room Bar. Formerly called Café Carintha, the Chart Room is a poppular venue where expert bartenders will invest time to get to know the guests, meaning by the first few days of our cruise they anticipated what we wanted before we had sat down. During the day, the Chart Room acts as a Café, with espresso coffee for sale dine in or take away. This is served by expert Baristas who can make a range of different coffee drinks as well as hot chocolates, babycinos and artisan teas. 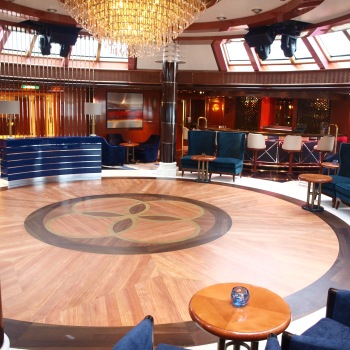 High atop the ship the Commodore Club offers sweeping forward facing views and is a wonderful place to sit with a book and read, or simply watch the world go by. The bar is quiet and has a sophisticated atmosphere that many enjoy. At night it transforms into the ship’s main cocktail bar, with a large menu of cocktails to choose from. Live music is provided thanks to a pianist or small band while the subtle mood lighting adds to the ambiance.

Just aft of the Commodore Club is the Yacht Club; Queen Victoria’s nightclub. Originally named Hemispheres, this room was updated in 2017 and renamed to share the name of the Night Club found aboard the Queen Elizabeth. It has a dance floor, band stand and coloured lights to make for a fun evening!

Like most ships, Queen Victoria has a beauty therapy centre and a health spa, called the Royal Cunard Spa. What’s nice about the Cunarders is they have a proper thalassotherapy pool which adds an extra sense of luxury to the experience. Other services include massage, a beauty salon, hairdressers and a fully equipped gymnasium.

After dinner, most guests head back to the Royal Court Theatre for the evening show. The shows varied from musicians to the Queen Victoria’s signature show, Victoriana.

Other entertainment here includes cabaret acts, comedy shows, stand up comedians and singers; so there is a lot of variety. On a previous voyage we even saw an Acrobalance team called Crazee Horse; who performed their Guinness World Record acts on stage – even more amazing when you consider the ship was moving and they didn’t fall over once! The theatre was at standing room only that night.

Queen Victoria is a wonderful ship with a very unique onboard atmosphere. The décor aboard, while unapologetically designed to resemble the Victorian Era, has a nice blend of colours, tones and lighting. She offers a modern take on old fashioned comforts and as such is a pleasure to sail aboard. We’re looking forward to being back aboard Queen Victoria again in the future.

Note: I travelled aboard Queen Victoria as a guest lecturer Courtesy of Cunard. This review is the opinion only of the reviewer and is not a guarantee that the service or experience aboard this vessel will be exactly that which is reported in this review. Every cruise differs from the one before it.