One of the greatest thrills of my career is presenting maritime lectures and talks in front of an audience. A lot of work goes into them; from researching the topics to putting slides together, but it’s worth every second for the chance to share the ocean liner story.

One of the trickiest parts is working out what stories in the long and illustrious history of the ocean liner to include. Sometimes serious culling is required to achieve the end result of a fast paced, informative and engaging talk.

My lectures generally run for about 45 minutes and cover a range of topics spanning from the 1830s to today. I’m always happy to chat after the lecture so if you’re attending one of my talks come and say hi and share your story.

What do I talk about?

It’s probably no surprise that my maritime lecture topics cover ocean liners and cruise ships past and present. However, what’s really interesting about this subject is how ocean liners have been involved in almost every world event. As such, the talks offer glimpses into Victorian life, the evolution of technologies such as steam engines, electric lighting and turbines, as well as the militarisation of ships during both World Wars.

Some of my topics include:

Where do I lecture?

My first ever maritime lecture was in August 2008 aboard the QE2 during a Mediterranean cruise that was part of her farewell season. Speaking aboard QE2 had been a long-term goal of mine so I jumped at the opportunity and haven’t looked back.

Since then I’ve spoken at venues all over the world including many engagements on various cruise ships. I regularly speak at maritime museums, with recent engagements at the Australian National Maritime Museum, New Zealand Maritime Museum and Sea City Museum in Southampton England.

I have also been a keynote speaker at conferences and events including engagements for the Cancer Council at the Hilton Hotel. 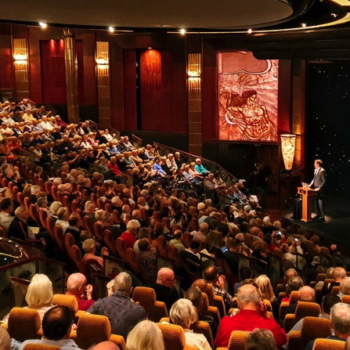 “It is always a joy to have Chris with us with his seemingly-limitless knowledge and expertise on all things ocean liner, which he carries with humour, warmth and authority. Chris is able to explore the incredible stories of the great liners in a down-to-earth and clear way that relates to those with considerable existing maritime knowledge and none at all. The only downside for us in Southampton is that he lives 9,000 miles away.”

“Chris is a wonderfully engaging speaker, with a wealth of knowledge on all things maritime.  On a number of occasions Chris has kindly spoken to our Cancer Council … supporters, thoroughly captivating them with his tales of Cruise Ships in the past.  We always received positive feedback from our guests and requests for Chris to attend again.”

“Chris Frame has visited the Rotary Club on several occasions to share his knowledge of travel by ship. Club members have enjoyed his presentations, as particularly witnessed by his return visits. Chris knows his subjects well and illustrates his talks with visuals to hold the listener’s interest.”

“… Libraries recently hosted Chris Frame for a presentation on The QE2 50th Anniversary and as a result I would highly recommend Chris as a very knowledgeable and engaging speaker. The audience thoroughly enjoyed Chris’ talk and gave some very positive feedback; “Great presentation – fantastic knowledge & fluent speaker”, “Absolutely fabulous!” and “Very interesting – excellent presentation”, to name a few.”

“U3A … consider ourselves very fortunate in having Chris Frame talk to our group, several times, at the Grove Library, Cottesloe, as he is always in demand, throughout the world as a very competent & entertaining speaker. Chris’ presentations are always well prepared & most importantly take into account the age & interests of his audience. The talks we have enjoyed cover not only the History of Ocean Liners from their very beginnings, accompanied by Historical footage, but also by their development over the years to the foreseeable future, plus interesting facts from his own experience. The result is a very clear, entertaining talk by a very personable speaker at a time when ‘Ocean Liner Holidays’ are gaining in popularity everyday!”

If you’re hosting an event and are interested in one of my maritime history of cruising lectures, click here to get in touch.