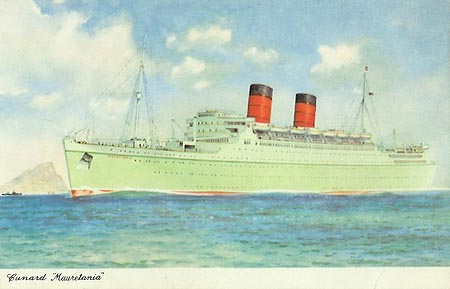 The first liner built following Cunard’s merger with White Star Line; Mauretania was laid down on 24 May 1937 and entered service on 17 June 1939.

Designed for the London to New York route, Mauretania was named by Lady Bates, wife of Cunard’s then Chairman, Sir Percey Bates.

Mauretania’s peacetime career came to an end when she was requisitioned for military service following the outbreak of World War II.

While alongside she was repainted in grey and armed with of 6-inch guns and other armaments before being utilised for trooping duties.

Her first wartime voyage departed New York on 20 March 1940 bound for Sydney where her interior was stripped and reconfigured to carry troops. She joined the Queen Mary and Aquitania on her first trooping convoy in May bound for Clydebank.

Mauretania remained on this service until 1957 when she was reconditioned for use as a cruise ship. Air-conditioning was fitted throughout and in a subsequent 1962 refit, her hull was painted in the same green colour scheme as used aboard Caronia.

However Mauretania was not a successful cruise ship and facing stiff competition from newer, purpopse built vessels, she was withdrawn from service in 1965 and scrapped.

On her delivery to the scrapyard in Fife, Captain John Treasure-Jones navigated the mud straits of the Forth River without the aid of tugs; giving Mauretania one last hurrah!