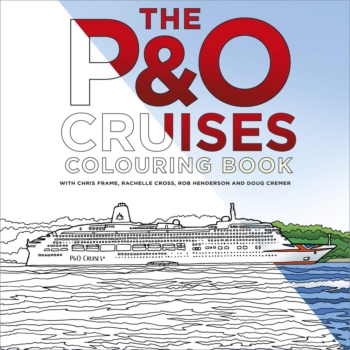 Throughout its long history, P&O has operated some of the most famous passenger ships of all time, including the Oriana and Canberra.

P&O’s early liners travelled across the globe, and played a huge role in cementing immigration to Australia and New Zealand, while acting as a gateway to the Far East and India.

The modern era has seen the company continue to evolve into a cruising giant, P&O Cruises being part of Carnival Corporation today.

This beautifully crafted colouring book celebrates the long heritage of P&O, the stunning interiors and exteriors of the vessels, and much more besides. Supplemented with fascinating text from Chris Frame and Rachelle Cross, it is sure to captivate and educate children and adults alike.

Chris Frame and Rachelle Cross have written over a dozen books as well as articles and stories for magazines and newspapers. Both have appeared on TV news speaking about cruising, while Chris has featured as an expert for the BBC, Sky News and ABC. They have written The Photographic Journey series, books in the Story Series, A Photographic History of P&O Cruises, A Photographic History of the Orient Line and The Evolution of The Transatlantic Liner.
Rob Henderson and Doug Cremer are P&O and Carnival historians, responsible for a significant maritime history archive and large collection of unpublished images. Doug joined the Sydney office of P&O in 1967 before moving to Qantas in the 1970s. Both now retired, they live in Australia.