I was first offered a chance to speak on TV news about the QE2’s retirement back in 2008. It was a bit of a daunting prospect; the camera, the journalist… what if I made a mistake?!

But as soon as they started recording and asked me about the ship, the nerves went away. I was speaking about my passion except this time, it was reaching thousands of people… epic!

Since then I’ve been interviewed as a cruise ship, ocean liner and aviation expert many times. I still get a few butterflies, but I love it! Some highlights are shown below. If you’d like me to be involved in your documentary, news piece or radio show, get in touch. This was a lot of fun! During the QE2’s 50th Anniversary Celebration I was invited to contribute to a new documentary being produced for Channel 5 in the UK.

The two-part documentary follows the history of QE2, from the idea behind a dual-purpose liner, through her construction, service life and ultimate retirement.

I was filmed at Sea City Museum in Southampton. We had just left the Cunard Queen Elizabeth after the QE2 50th Anniversary Celebration voyage, and had to run from the taxi in the rain to get to the museum in time for the interview!

Two and a half hours later, the interview was wrapped up and I gave a lecture at Sea City about QE2’s service life. After what felt like a long wait to see how the filming turned out, the documentary was released in February 2018!

You can check it out here. 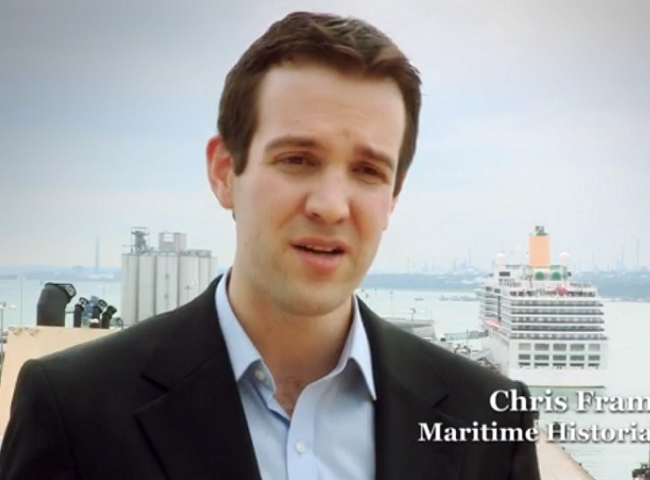 This has to be one of my favourite media experiences. In 2015 I was interviewed for BBC television’s Heir Hunters show. The show follows a team of experts searching for the heirs to lost fortunes. In this episode the key link was a connection to the Cunard Line. I spoke about the history of the Cunard Line and its significance in the transatlantic race.

I was invited back to Heir Hunters for an episode that aired in 2018. This time the topic was convoy shipping during World War II. The episode is available to watch on BBC iPlayer, however if you’re living outside of the UK you can see a preview of the episode. Click here to view.

2017 marked the 50th Anniversary of the QE2’s launch, which was a big deal for us. Rachelle and I had a book due out in September all about the QE2, and I was scheduled to lecture aboard the Queen Elizabeth during the QE2 50h Anniversary Celebration Cruise.

To celebrate the ship’s anniversary, the BBC show ‘Inside and Out’ produced a tribute episode all about the ship and her impact on Southampton. I was interviewed aboard the Queen Mary 2 about the history of QE2; and the show also featured Captain Ian McNaught, the ship’s last master, as well as Bob and Francis Spears who sailed on QE2 over 40 times.

The picture below is of the four of us aboard QM2. You can see the BBC Episode here.

When QM2 visited Tasmania for the first time, I was interviewed by Southern Cross News about the ship and her impact on the Hobart economy. I had actually left QM2 that morning to fly home and so the interview was conducted in the airport carpark just moments before I was due to catch my flight!

During Queen Mary 2’s call to Perth, Western Australia, I was lucky to lead a media tour of the ship and spoke with Channel 9 about the history of this great liner.

During Queen Mary 2’s call to Adelaide in South Australia, I was asked to host a media tour of the ship. Here, I spoke with Channel 9 about the history of the QM2.

Back in 2014 I was interviewed aboard QM2 as part of a feature being done for the ship’s visit to Adelaide. It was great to share some QM2’s historical insights.

During Queen Mary 2’s call to Perth, Western Australia, I was invited to speak about the significance of this ship, the largest and most extravagant ocean liner ever built.

In 2016 I showed journalist Mark Pownall and photographer Attila Csaszar from Business News around the Queen Mary 2 while it was in Fremantle, Western Australia. The purpose of the tour was to show Mark the interior as he was writing a piece about our book – QM2: A Photographic Journey.

During the tour we got chatting about my connection to Ocean Liners and cruising. Mark invited me to speak on his popular Business News podcast about the impact that cruising has in Australia, the big cruising trends and my love of ocean liner history.